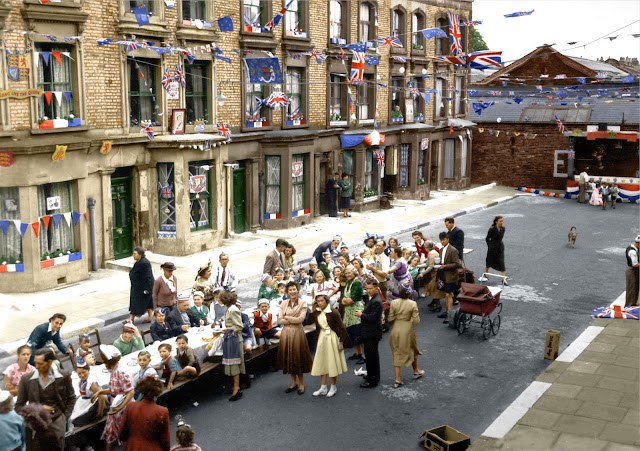 The Coronation of Queen Elizabeth II took place on 2nd June 1953. It was celebrated throughout the country with street parties such as this one in Rillington Place in London. The parties were for the entertainment of the children although whole communities joined in, often wearing fancy dress. Many foods were still rationed, eight years after the end of World War II, so the neighbourhoods saved up their coupons in order to provide a generous spread. Bunting decorated the street, together with Union flags and those of Wales, Australia and New Zealand. The stage at the end of the street suggests that entertainment is planned.

When this photograph is studied, the roadside kerbs will be seen painted in black and white, a remnant of the wartime blackout when this aided night-time visibility. There is just one street light, suspended from an overhead cable.

Notting Hill was developed in the mid 19th century on the Ladbrook Estate, as a fashionable suburb. Rillington Place in the north of the area was built in the 1869s as poor quality speculative housing. This was formerly farm land and before the 1850s only two buildings were to be seen; Portobello Farm and Notting Barns Farm. It was a cul-de-sac with a row of ten houses on each side, and at the end, the Western Iron Works. Here was the foundry of James Bartle, a business which produced manhole covers, lamp posts and railings. Other specialities were gasholders and cast iron canal bridges. Bartle had 75 employees and members of his family lived at 3 Rillington Place. Sold in 1910 to C. S. Windsor, the company went on to manufacture in the 1920s, the Windsor light car. The company went into liquidation in 1927 after the death of its owner and the buildings became the Department of Works for the Borough of Kensington.  On one side of Rillington Place, the houses backed on to the newly opened Hammersmith and City Railway. The properties deteriorated and by 1953 some were in appalling condition. Many were divided into flats, one on each floor. They had no bathrooms and shared the outside toilet.

The last house on the left, number 10, is empty, its last occupant in jail awaiting trial for murder. John Reginald Halliday Christie had killed at least eight women including his wife, and their bodies were concealed around the house and in the garden. Christie, originally from Halifax already had a criminal record and had spent four terms in prison. Ironically, he served as a reserve policeman during the War, his record unchecked.

Timothy Evans and his wife, Beryl, and their daughter Geraldine, moved into the top floor of number 10 in 1948. A year later, Evans reported to the police that his wife and daughter were dead. After a search, the bodies were discovered together with a 16 week foetus in an out house, they had been strangled. Evans, illiterate and with a low IQ was forced in to confessing to the murders. He was found guilty and on 9th March 1950, was hanged at Pentonville Prison in London. The police investigation was seriously faulted and neglectful. It should have been clear that Evans was innocent.

Christie moved out of the ground floor flat on 20th March 1953 and another tenant of the building, when using the kitchen, discovered the remains of three women. Christie was arrested on 31st March and as the interrogation progressed, he admitted murder. His trial began on 22nd June and having been found guilty of killing his wife, Ethel, he was hanged at Pentonville Prison on 15th July.

Eventually, in 1966, Evans was posthumously pardoned. In 2003 his sisters were awarded a payment in compensation.

Both Evans and Christie were executed by Albert Pierrepoint. He was a Yorkshireman, who, in his 25 year career, hanged up to 600 people including 200 war criminals. Pierrepoint was also a publican, firstly at the “Help The Poor Struggler” at Hollinwood, Oldham and later at the “Rose and Crown”, Much Hoole, near Preston. Whilst still at Hollinwood, one of Albert’s regular customers, James Corbitt was found guilty of the murder of his mistress, Eliza Woods. Pierrepoint had the duty of hanging him at Strangeways in November 1950.

Many North Western towns chose a Rose Queen as part of their annual Carnival festivities and usually, she would be crowned by a minor local worthy. In 1950, Whaley Bridge in Derbyshire, gave that honour to none other than the official hangman. Pierrepoint was no stranger to Whaley Bridge and would often be seen visiting the town’s hostelries.

Rillington Place was renamed Runton Close in 1954 to try to remove some of its unfortunate associations. The street was demolished in 1970 and redeveloped. Today, modern housing occupies the site and the value of the properties reflect Notting Hill’s fashionable status. 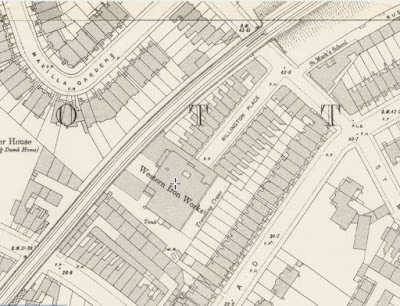 "The Roman Invasion of Marple" 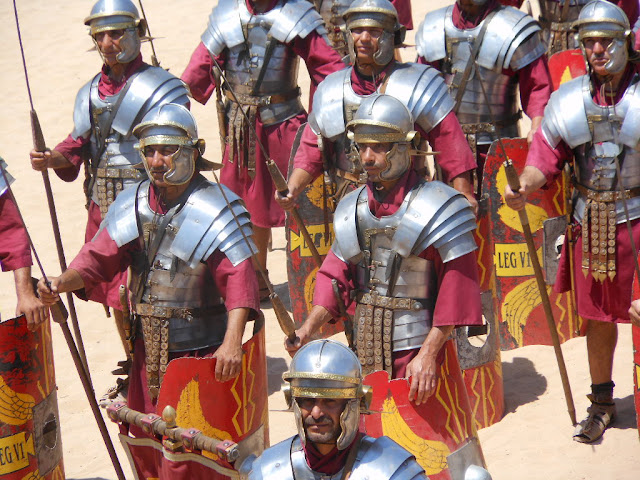 By Jack Turnbull, published in "Verse and Worse".

"Yer'll 'appen have heard about t'Romans
Who went about conquering folk,
Invadin' and rapin' and pillage
Then killin' all t'men fer a joke.

Well one day Caesar were studying th'atlas
He stood there, 'is 'ands on 'is 'ips.
He said he were fed up wi' red wine and pizza,
And fancied some Vimto and chips.

So his legions advanced towards England,
And landed on t'shores close to Rhyl.
They marched up the A6 to Stockport,
And stopped for a pint at Rose Hill.

"This seems like a good place to conquer."
Said th'Officer. "Best that we've found."
Then followed his lads into t'Railway
And ordered chip butties all round.

The landlord of t'pub he were beaming.
It were t'best trade he'd had for a week.
Ten thousand Romans all wanting a drink,
(And five thousand wanting a leak).

But the folk of Rose Hill were right grumpy,
What wi' so many Romans around.
They moaned 'cos the bus queues were seven miles long
And crisps had gone up to a pound.

The news soon spread up the village
That t'Romans had come for a fight.
But the good folk of Marple weren't worried,
'Cos the village had shut for the night.

The Romans assembled next morning,
Presenting a fearsome sight,
But they'd all had a skinful of Robbies,
So they weren't feeling much like a fight.

They marched up the road towards Marple,
Passing t'Bowler and t'Jolly en route.
While the villagers booed and chucked insults,
Not to mention half bricks and bad fruit.

The Romans advanced through the village,
And stopped at the Navi' by t'Cut.
"HAIL CAESAR!" the officer bellowed.
"SOD OFF!", said the landlord, "WE'RE SHUT!"

The officer got quite aggravated
At not being served at the inn.
So he gathered his soldiers around him and said,
"Righto lads, let t'fighting begin."

The captain of t'Romans were Brutus,
And Albert were in charge of us.
Now Brutus, he came in a chariot,
And Albert .... he came on a bus.

So t'battle kicked off Monday morning,
A bit of a one sided do,
'cause t'Romans had ten thousand archers,
And Marple could muster ... just two.

Now both of our archers were bakers,
But that day they'd shut up the shop.
They said, "If yon Romans are comin',
They'll have t'get their bread from t'Co-op."

The fighting raged all over t'village,
Through High Lane and onto the Ridge,
Wi' cavalry charges through Compstall,
And punch-ups around Possett Bridge.

"We'll only be warrin' five days a week."
Said t'Marple Shop Steward, Alf Platt.
"Five days a week, and if tha' wants any more,
It's time and a half after that!"

So t'battle were halted come Friday,
And everyone stopped for a brew.
There were racin' and snooker and darts on the telly,
So our lads took t'weekend off too.

When t'fightin' restarted on Monday,
Both sides faced each other in t'mud.
It hadn't stopped rainin' since Friday,
And t'forecast weren't lookin' too good.

The Romans had set up a rest camp,
Wi' a stall sellin' pizza and cakes,
And a pond so the soldiers could paddle,
At a place what they called t'Roman Lakes.

The fighting went on for a fortnight,
Wi' rapin' and pillage on t'side,
And most of it done by our own lads,
(Plus a couple of fellas from Hyde).

But the weather weren't kind to the Romans,
The rain turned to ice as it fell.
It rusted their swords and their armour,
And shrunk all their togas as well.

It weren't much fun being a Roman,
Wi' yer toga all soggy and wet,
Wi' rain comin' down like big stair rods,
And wellies not invented just yet.

The captain in charge of the Romans,
(Seeing things were not going quite right),
Called a meeting wi' t'leader of our lads,
Which was held at The Hatters that night.

"I'll settle for that", said our leader,
"Our lads don't like fightin' in t'rain.
Besides, that reminds me, next Friday,
It's Wakes Week and we're all off to Spain."

So the Romans packed up their equipment,
Their weapons and all t'other stuff.
They'd been and they'd seen, but not conquered,
So they marched off to Rome in a huff.

There's not a lot left of th'invasion,
No statues or castles on t'Ridge.
Nowt at all to remind us of t'Romans,
Just The Legion, The Lakes and The Bridge." 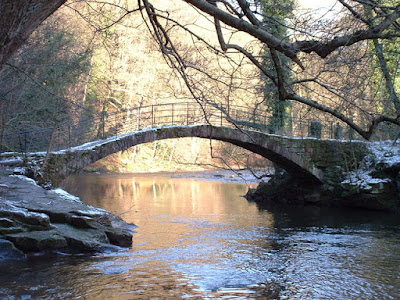 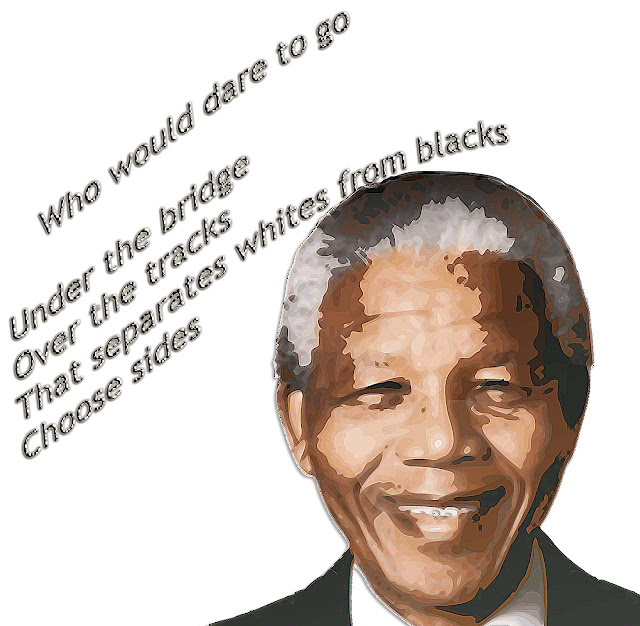 A Timely Conversation
With My Brother
Julian Thompson 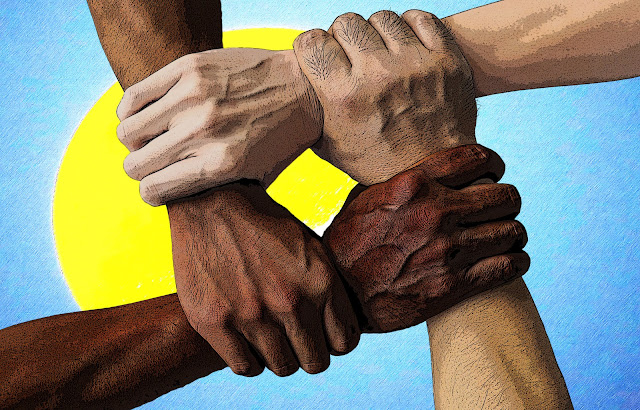 Julian:       In 1987 Tracy Chapman played in Zimbabwe and I went to the concert.
It was an anti-apartheid concert. I guess Zimbabwe was a frontline at that time .Nelson was still in prison.
All I will say is wow!

She sang Across The Lines.

Xie Yousu   謝友蘇 was born in Suzhou, Jiangsu province in 1948.
Based in Suzhou,  Xie Yousu specialises in painting the ordinary people in old Suzhou. Ordinary and trivial activities in life serve as ideal subjects. The poignancy and humor with which he paints his people carrying on with their lives – whether as recreation or profession – are nothing short of memorable. 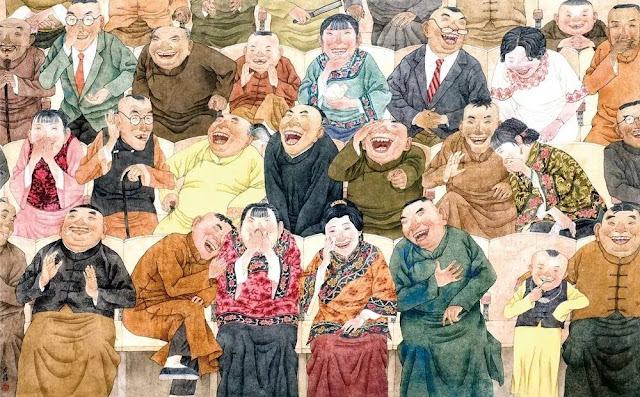 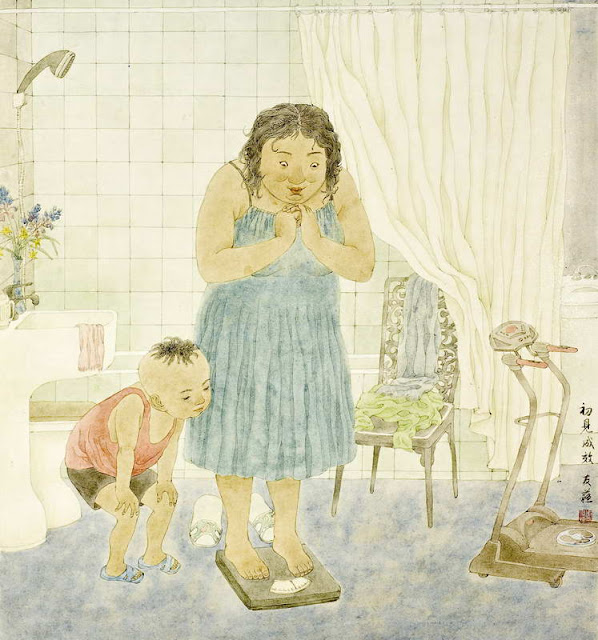 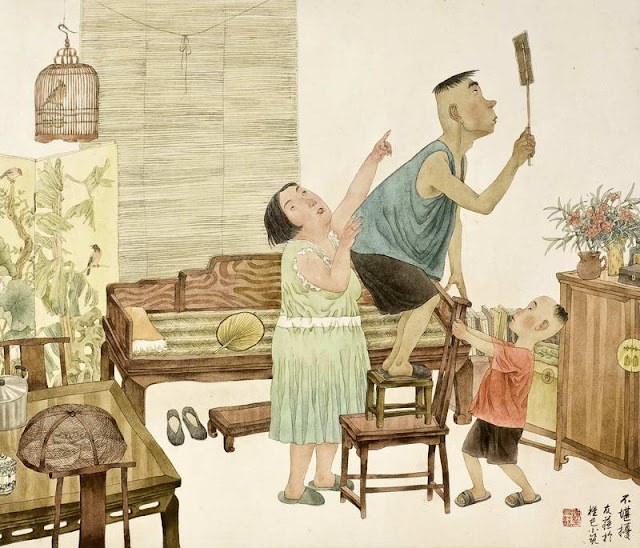 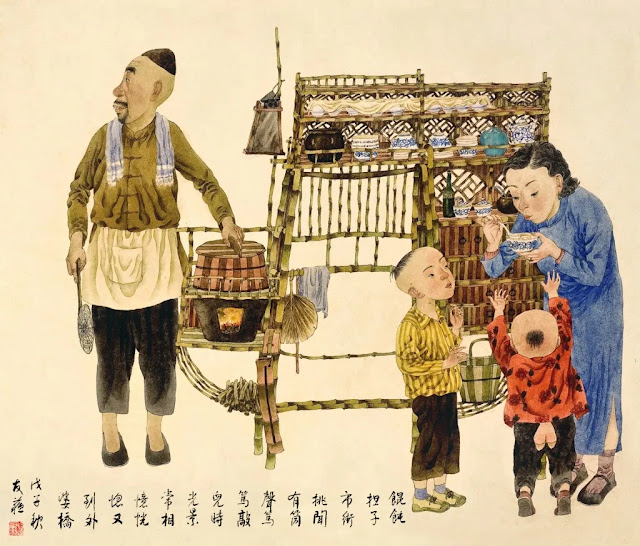 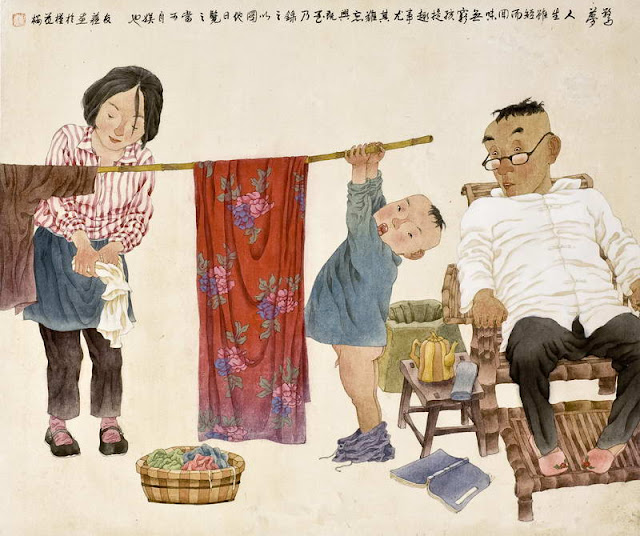 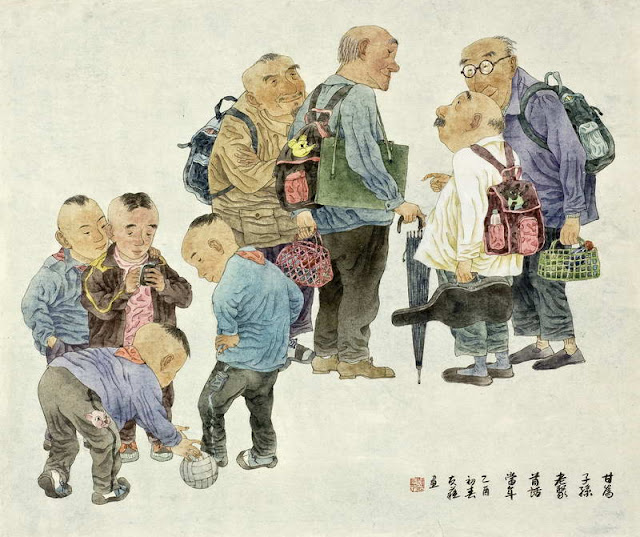 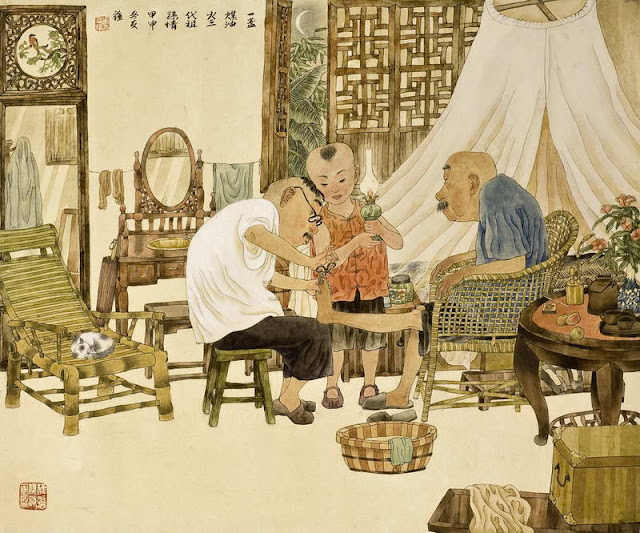 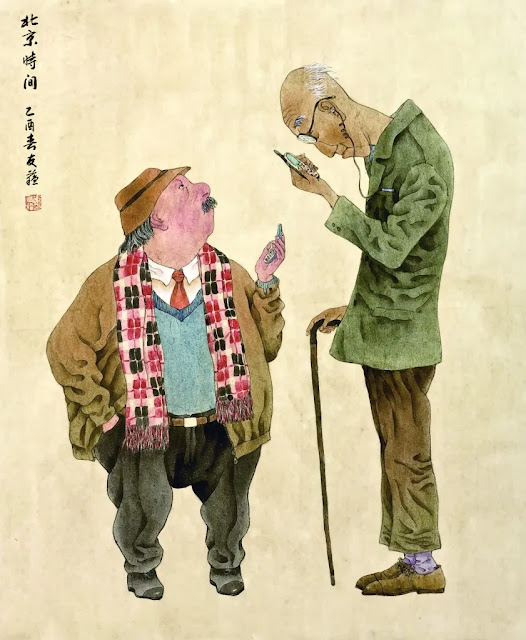 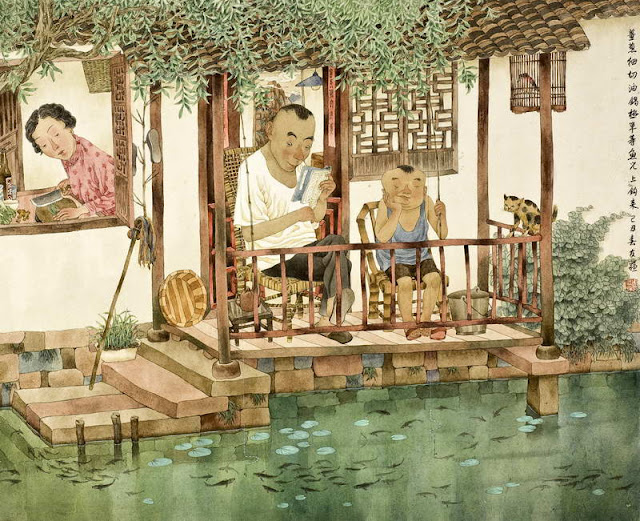 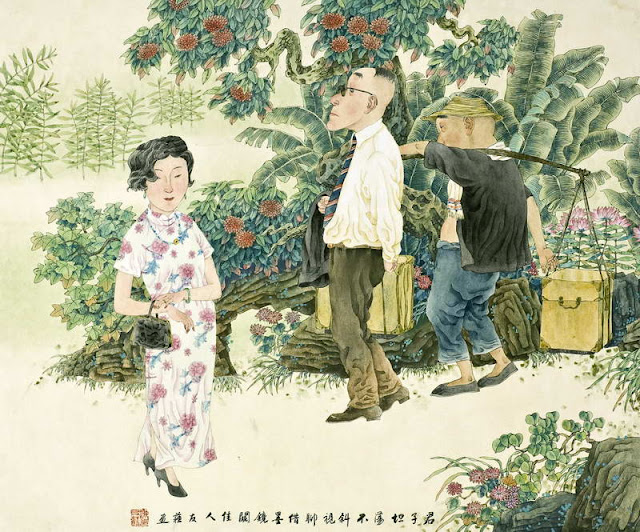 Eleanor Allen Moore (26 July 1885 – 17 September 1955) was a British painter who was born in Northern Ireland, but became one of the groups of painters known as the "Glasgow Girls".

During World War I Moore served as a Voluntary Aid Detachment nurse at Craigleith Hospital in Edinburgh. In 1922, Moore married Dr Robert Cecil Robertson and she gave birth to their daughter, Ailsa, the following year. In 1925, the family moved to Shanghai, China, where Robert was appointed Public Health Officer with Shanghai Municipal Council. Eleanor continued painting, producing watercolours of the Chinese people, and was also popular as a portrait painter in the expatriate community. They apparently toured the country in their houseboat.
Eleanor and Robert stayed in Shanghai until the outbreak of the Sino-Japanese war in 1937 when they moved to Hong Kong. After World War II Eleanor returned to Scotland where she died in 1955.  These days she is often included in the group of artists known as the Glasgow Girls.