Clifford Brown's chip shop was at the top of a steep brow that looked out over playing fields and the railway line at the back. Proudly parked outside was a pink Cadillac bought at a pinch from an auction in Chester.  The Cow And Bell next door had it's curtain's closed. Lionel Bell  still warm in his coffin had choked to death on his own self importance or at least that's what Clifford told his son Lester, who was ten and a bit too keen on knowing the morbid facts. 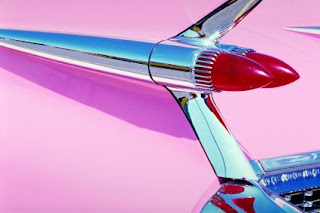 Lester wanted to run  straight away next door to ask Daisy if he could pay his last respects at the side of the open coffin before the lid was nailed firmly down should Lionel ever spring back to life.  Outside, the Cadillac glinted bright in the morning sun. ”Come on” said Lesters dad, “we will go up and see your Uncle Seth”. The car engine cleared its throat, roared and gently ticked over at a soft whisper; the leather seats had that barely used, comfortable feel. Lester thought of popcorn and was reminded of all those American films he had seen at the Regal.  Rugby jumped into the back and off they soared towards Barnfield.Croft farm, overlooking the reservoir at Barnfield hadbeen flooded out years ago to create the vast volume of water that eventually  came out through the taps in most of the houses in Thorpley. Seth still had a few acres and about five hundred sheep that he kept at the side of the lake. Boats were permitted to sail up and down the length of the reservoir and Rugby swam gladly alongside shaking himself thoroughly when he reached the bank.
Uncle Seth looked darkly at the pink Cadillac whose fins stood out sharply against the white of the farmhouse. ”There must be some money in frying chips then?”  he coughed into a handkercheif and spat. The light from the lake seemed to illuminate the car giving it a surreal appearance, surrounded by so much green and the vacant astonishment of the sheep.
A skull sat on the widow ledge inside the farmhouse  and was never to be moved less great evil befell the farm and its residents.
at November 25, 2016