A canalside scene in the Staffordshire Potteries in 1948.

This location in the Staffordshire Potteries, is unknown. The waterway will be either the Trent and Mersey or the Caldon Canal, both of which served the region.
An unidentified narrowboat is moored opposite a "potbank", a pottery factory with its distinctive  bottle kilns. The canal bank in front of the kilns is piled up with coal. Mined locally, it will have been delivered by canal and will be used to fire the kilns.  Much of the china clay used in the production of pottery was also delivered by canal. Transported by sea from the quarries in Cornwall, it was transhipped to narrowboats at Ellesmere Port in the Mersey Estuary for the relatively short journey to the Potteries. Narrowboats were often employed in the Potteries to deliver the finished products. The boat in the picture, appears to be one of the fleet of the Mersey, Weaver & Ship Canal Carrying Company, one of the major operators in this area. The boat is fully laden, apparently with coal and is moored alongside a makeshift platform where it will be unloaded manually. 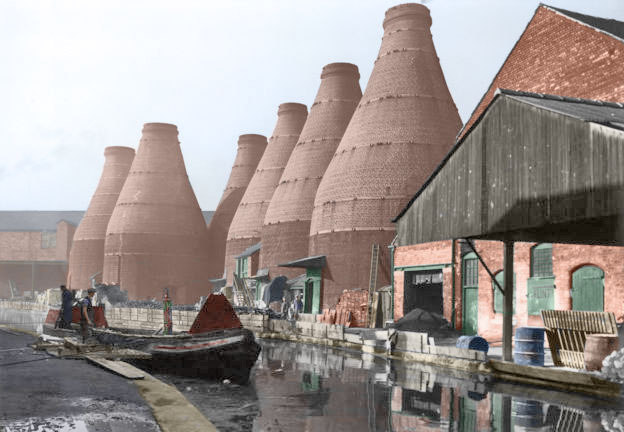