At the Halfway House

This photograph was taken in 1884 by Robert French, a Dublin photographer. Pictured are Daniel Ferry, his wife Ellen, daughter Biddie and Michael Coyle. Note that both Mrs Ferry and her daughter are barefoot. The 1901 census lists Daniel as a publican and farmer.

The jaunting car bears the name of Gweedore Hotel and was perhaps used as a means of transport for their guests. It had probably carried the photographer out from the town.

The Halfway House was at Dunlewy, a tiny village 5km East of Gweedore. The village lies at the foot of Mount Errigal, which at 751m is Donegal's highest and most distinctive peak. Errigal is capped with quartzite which glows pink in  the setting sun.  The small town of Gweedore on the Atlantic Coast is in the heart of a Gaelic speaking district where the Irish language is in constant use. 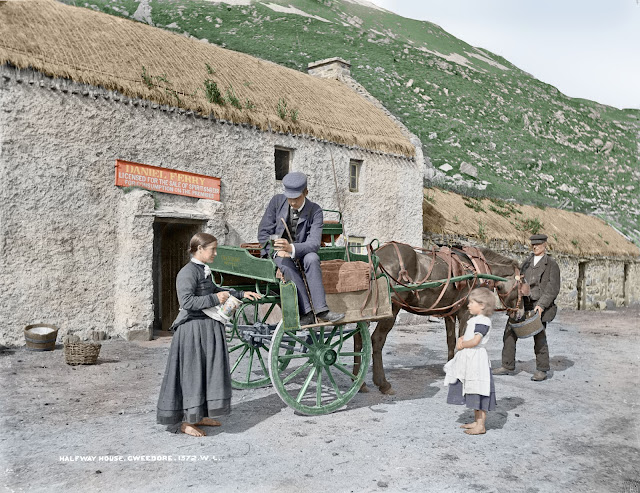