Imperial Road Gas Works in Fulham was built in 1824 by the Imperial Gas Light and Coke Company. The first gas holder was erected in that year followed by others as demand increased. Gas was manufactured primarily for street lighting but was also supplied to the nearby Hurlingham Club for ballooning. Being near to the River Thames, coal was delivered by coastal steamers which had hinged masts and funnel in order to pass under London's bridges. The large fleet of ships was owned by the Gas Light and Coke Company and managed by Stephenson Clarke. The Company operated four gasworks in London and coal was delivered by river to three of these, the Southall works being supplied by rail.
There were eventually six gas holders at the Fulham site and one dates from 1830 and is the oldest in the world. Along with the adjacent office and laboratory buildings, it is Grade II listed and the only one remaining.
The discovery of natural gas under the North Sea in the mid 1960s saw the demise of "Town's Gas" and the closure of all of the traditional gas works during the following twenty years.
The Fulham Gasworks found a new use and is now home to over 300 studios and creative businesses. There is however, a proposal to redevelop the site for housing.
The photograph by Emil Otto Hoppe has been digitally colourised. Note the postman by the gate about to make his delivery. 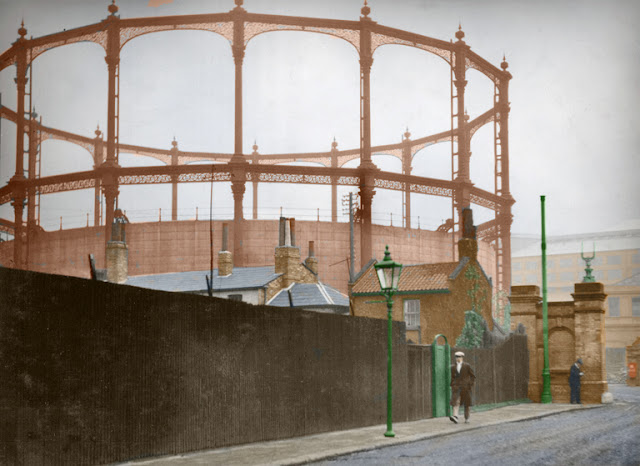