The Tiger Bay Fishmonger in 1951 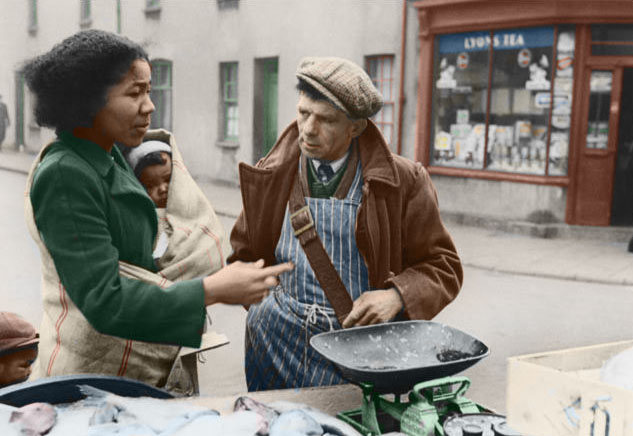 Tommy, the Bute Town fishmonger talks to a customer.

Bute Town, often called "Tiger Bay",  is a district in the south of Cardiff, close to the city's docks. It was developed in the early 19th century, a model housing estate built by John Crichton-Stuart, the 2nd Marquess of Bute after whom it is named. The docks, which exported wast quantities of coal, were  owned by the  Crichton-Stuarts who were also instrumental in developing the coal and steel industries of South Wales. Through these enterprises, the 3rd Marquess, John Patrick Crichton Stuart became the wealthiest man in the World.

Bute Town became crowded as it drew in migrants from many parts of the World and became home to communities of 45 different nationalities. It earned the name "Tiger Bay" in the late nineteenth century and a reputation for being a tough and dangerous district as well as becoming Cardiff's red light district . Bute Town was largely re-developed in the 1960s with further development in the 80's.  As well as hosting a multinational population, Bute Town has always had a large Welsh speaking population.

"Tiger Bay" is of course well known as the former home of singer Dame Shirley Bassey who was born in Bute Street in 1937.

Bute Town is alongside the re-developed Cardiff Bay, a stretch of fresh water now enclosed behind a barrage and on its banks offering a wide choice of entertainment venues, bars, restaurants, concert hall and hosting the National Assembly Building, "The Senedd".  The Norwegian Church is now an arts centre. In former times, it served a migrant population and Norwegian seamen. As a child living in Cardiff, author Roald Dahl regularly joined the congregation.
at February 14, 2017