Photograph of a Royal Mail day car in Eyre Square, Galway. The photograph is undated but research suggests that it was taken in the mid 1860s

Charles Bianconi started his coaching business in 1815 with two day cars called Bians running between Clonmel and Cahir in Co. Tipperary. By 1850 he was serving 120 Irish towns and cities with a fleet of 200 vehicles and 500 drivers. The cars were built and maintained at the company's works in Clonmel. There were 1300 horses employed and these were changed at a network of 140 "stations", often inns or hotels. The Galway station was Black's Hotel in Eyre Square. Mail was carried as well as passengers and goods and the average speed was 8 miles per hour. The journey from Galway to Dublin took two days although by 1851 the railway had taken over this route. The daily service to Clifden, a journey of some 50 miles left at 9.00 am. The fare was seven shillings and sixpence for the 11 hour ride.

The Royal Hotel was very well appointed and was frequented by nobility and gentry. Noted for comfort and convenience, it had three lounges as well as dining and commercial rooms. By 1909 it was brilliantly lit by electricity. Mrs Webb, whose name is over the property next door, took over the Royal in 1865. The Royal was sold in 1952 by its then owner Mr Costelloe for £32,000. It was demolished and a branch of Woolworths built on the site.
Webb's Hotel was built in 1810 as the Clanricarde Arms. Still in business, it is now known as the Imperial. 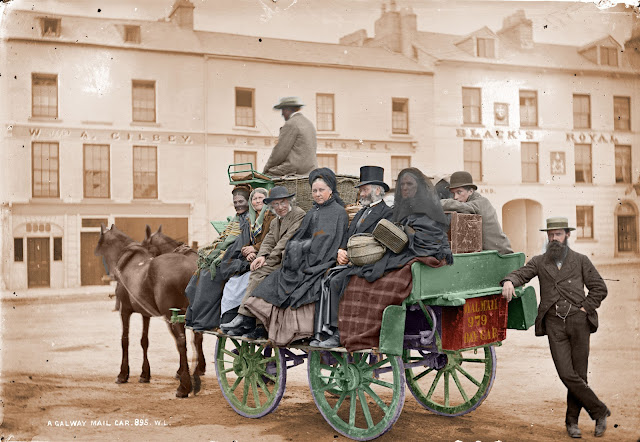