There is little information about this photograph although it does give us a number of clues.
On the side of the cart is a panel with the name of the owner, Charles Saxby of Disley, Cheshire.   Mr Saxby was a gentleman farmer from Sussex, born at West Dean in 1805.  He purchased the Furness Vale Printworks, then in Disley Parish, in 1857, in partnership with Mr Frank Marshall, for £10,500.
In addition to the Printworks, the property included 23 acres of land including Lodge Farm.
The photograph appears to be taken at the end of harvesting  and the workers are celebrating with a couple of flagons of ale.  There are rather a lot of workers for such a small farm so they were perhaps seconded from the Printworks.
Charles Saxby died at Ormskirk in 1879 after which his son Frederick took over the Printworks. The picture will therefore have been taken in the period 1857 to 1879. 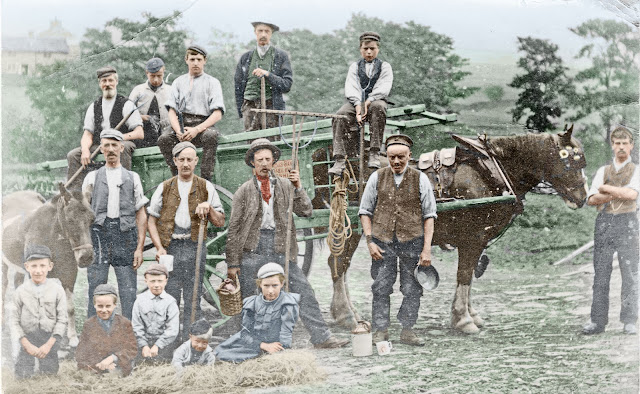