They Were Not Always Red

Buxton's "Penfold" pillar box stands in The Square, opposite the Opera House. 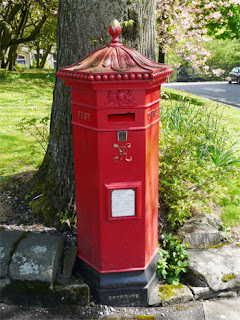 Post boxes date back to 1809, the first examples being installed
in walls. The first free standing pillar box appeared in Carlisle in 1856. There were several early designs, many being cylindrical.  One style was designed by a committee and they forgot to include an aperture to post the letters. A slot had to be chiselled out on site before they could be used, thus spoiling their appearance.

There was no standard colour scheme until 1859 when pillar boxes were painted bronze green with the lettering and royal coat of arms picked out in gold. The now familiar red was introduced in 1874 although it was 10 years before they were all repainted. A few boxes still carry this green livery.

John Wornham Penfold 1828 - 1909 was an architect and surveyor from Haslemere, Surrey with a practice in London. He is most famous for the design of a hexagonal pillar box which first appeared in 1866.

There are nine different types of Penfold box in three sizes. That in Buxton is of the largest size and is now rare. They were intended for city centre locations so this one may have been re-located here.  300 Penfold pillar boxes were made and about half survive although 100 replicas were produced in the 1980s

These cast iron boxes were made by Cochrane Grove & Co of Dudley between 1866 and 1879; their name can be seen on the plinth. The top of the box is decorated with acanthus leaves and a bud and has decorative balls around the rim.

Buxton also has a so called "anonymous" pillar box. These were introduced in 1879 and were cast without the words "Post Office" and without the coat of arms hence their anonymity.

Penfold was the sidekick of 1980s cartoon character Danger Mouse. Penfold made his home in a pillar box in London's Baker Street. 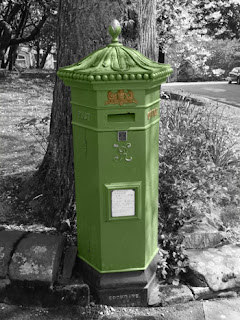 typically British fashion they have a large following of aficianados who record, preserve, restore and write extensively about them.

Our second picture shows how the box might have originally been painted.
Posted by Borninaditch at 16:29