There really is a Bash Street

Bash Street is in the centre of Dundee where a road has been named in honour of the comic strip from the Beano. Published in Dundee by D. C. Thompson, the comic has featured the Bash Street Kids every week since 1954. 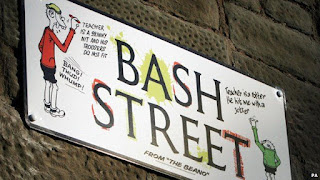 Although the kids should be in their seventies by now, they are all just nine years of age. Class 2B of Bash Street School has just ten pupils who are taught by long suffering Teacher.  Most of them live in Bash Street Towers in Beanotown. 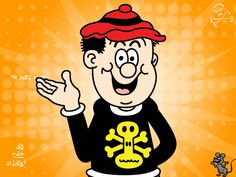 Leader of the gang is Danny who established himself by giving the others a wine gum each.  Daniel Morgan hates school and is said to have the soul of a pirate. Being lazy, he doesn't do well at school but it is he who plans most of the gang's exploits.  Danny often gets the better of Dennis the Menace, a great rival from the Beano's companion comic strip. 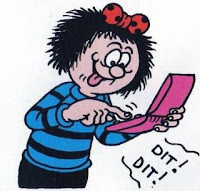 Danny's second in command is Toots, the only girl in Class 2B. Sydney Kate Pye is a bit of a tomboy and is quite bossy. She has a crush on Dennis the Menace and has been known to send him a valentines card. Toots happens to be the twin sister of Sidney which is why of course they look and dress alike.

Sidney Pye likes to play tricks, especially on
Smiffy.  He often gets into fights with Spotty.
His sister Toots is his worst enemy as well as being his best friend.  Sidney likes all animals except for spiders but the favourite of all of his pets is Patrick the pigeon. 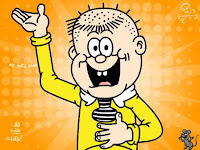 Smiffy or Aristotle Smith is said to be kind even though he cannot remember the colour of the sky. He keeps a pet pebble called Kevin and collects used raffle tickets. 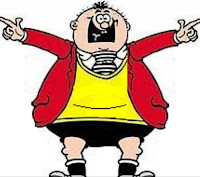 Fatty's name really is Fatty Brown. He is of course always eating and is the only pupil able to stomach school cook Olive's food.
He's said to be good at gymnastics !

This is Erbert. Being extremely short sighted he suffers from all sorts of tricks played on him by his schoolmates. His poor sight leads to him suffering mishaps and often getting lost.  Herbert Henry Hoover's parents likewise have such bad eyesight that they are often unable to find their way around town. 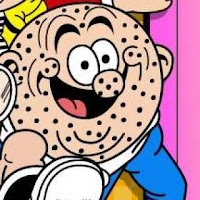 Spotty is recognised, not only by his numerous spots but also by his extremely long school tie, his prize possession. James Cameron often interrupts lessons and is particularly good at starting arguments.

Wilfred Wimble is small and quiet and hides his thoughts behind his green jumper. Nobody has ever seen Wilfrid's neck other than his dad. He has a collection of magic tricks and can even make himself disappear. 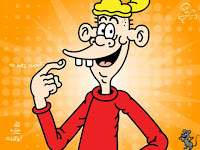 Percival Proudfoot Plugsley is usually known simply as Plug. He thinks himself handsome although he did once faint on seeing his own reflection.  He is the only pupil to have had a girlfriend,  attracted by his devastating good looks. Plug lives in Gasworks Road with his sisters Plugella and Plugena and is the only pupil in Class 2B to live outside of Bash Street. 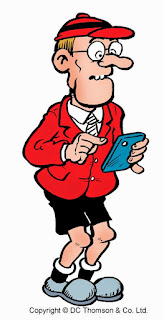 Cuthbert Cringeworthy is detested by all. He is the brightest student, teachers pet and swat. He actually does his homework and wears the full school uniform. He would like to fit in and be like the others but he tells tales ! 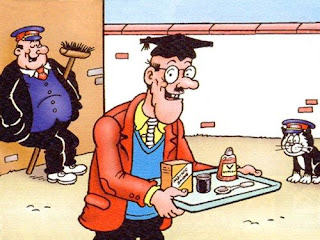 Teacher is never addressed by any other name although it was once revealed that he is called Algernon. He is married to the bossy Mrs Teacher and always grovels to the pompus headmaster, Headward Headington-Hail whom he refers to as Your Headship. Teacher's old car is still started by a crank handle.

The school caretaker is known as Janitor. He's lazy and hates students who break the rules. He likes to boss and take advantage of the school cat Winston. The cat however, is crafty and often gets the better of Janitor. 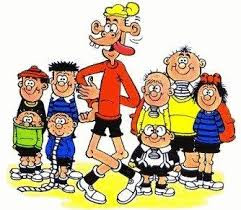