A Guards Officer Is Fitted For A Bearskin 1957 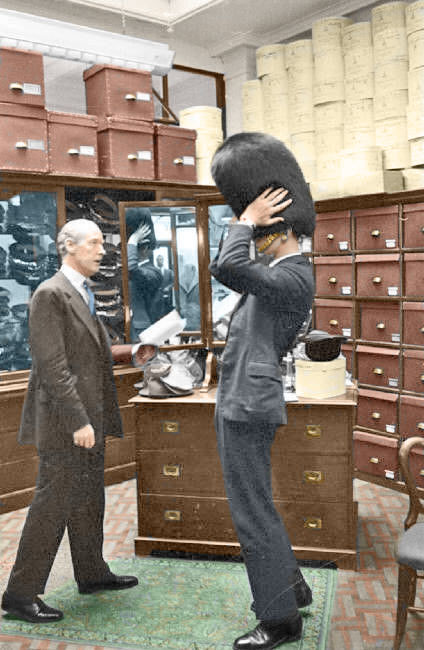 A Guards officer is fitted for a bearskin at Herbert Johnson's hatters shop at 38 New Bond Street in London.  This business had been established in 1889 when the young Herbert was encouraged by the Prince of Wales whose top hat he had repaired. A reputation for high quality craftsmanship soon brought the patronage of the well dressed gentlemen including royalty. Johnsons specialise in classic hat designs and also supply dress caps and berets to most military regiments. There have been several changes of ownership was well as address since the founder retired in 1928 and the business is now owned by Swaine Adeney and Brigg. The shop is now located at Piccadilly Arcade.

The bearskin hat dates back to the mid 19th century when French Grenadiers wore them to give added height and impress their enemies. The British Grenadier Guards adopted this headgear following the Battle of Waterloo and this was followed by two other foot regiments in 1831.  The bearskin is part ofa  ceremonial uniform and is made from the skin of the Canadian black bear. Thousands of bears are culled each year by Inuit hunters to control populations and approximately 100 skins annually meet the Army's needs. They are purchased at auction by the manufacturers at a cost of about £650 each. Each hat requires an entire pelt and with care will last for decades.