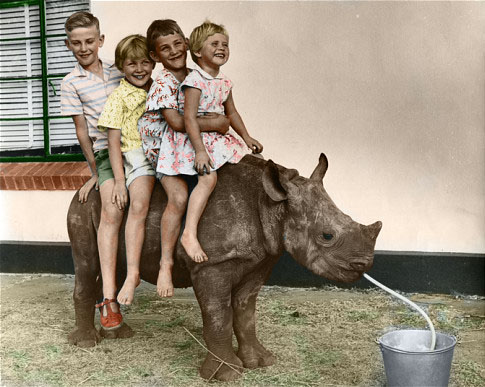 My dad was the head vet of Operation Noah, a huge conservation project to relocate wildlife when the Zambezi river was dammed, creating Lake Kariba. One morning in May 1962 they darted a female black rhino and unfortunately, she moved into the water just as the drug took effect. She drowned before the rangers could get her out. She was lactating, which meant she had a baby, and they found this tiny rhino, no more than six weeks old. Dad brought the rhino home to look after. Rupert [named after Rupert Fothergill, the head ranger of Operation Noah] was shipped up to suburban Salisbury [now Harare] from the Zambezi valley. We put him in a cowshed at the bottom of the garden but that night there was an extremely cold frost and the next morning he was almost on his last legs. Dad brought Rupert up to the garage and made him a nest out of hay bales and used infrared lamps. It became his little haven; we had to coax him out – he was very nervous at first. Then quickly he became part of the family. I think he thought he was just another Condy kid – he would go in and out of the house as he pleased.

I am the oldest of four. That’s Diana, then aged three, at the front, with David, six, Catherine, seven, and me at the back, aged eight. This photograph was probably taken a month before Rupert left us in November 1962. He was quite big by then and was drinking milk with a straw from a bucket. He would have eight pints four times a day. When he first arrived he weighed 150lb; six months later he weighed more than 500lb. We couldn’t believe how quickly he grew. Dad had analysed the milk of his mother and found it to be very high in protein and very low in fat. Rupert always loved bananas and lychees. We tried to introduce him to the natural vegetation but he didn’t like that, so he ate sadza [maize meal] made into a porridge.

We knew we couldn’t keep him forever, so after six months it was decided that he would go to Matobo Game Reserve, where there were no lions. Mum cried and cried – it was like sending off her little boy to boarding school. Two years later we went to visit. Rupert came out of the bush and we were shocked to see this huge animal. Mum began calling, ‘Come Rupey my boy…’ Rupert let out a strange little squeaky sound – not what you would expect from such a big animal. We were convinced he had recognised us.


Sadly, not long after that Rupert was found dead in the bush. It will always be a mystery why Rupert died because he was very healthy and everyone was happy with his reintroduction. It was only in the making of a documentary, My Wild Affair, when I went to Lewa Wildlife Conservancy in Kenya, where black rhino have been raised, that we found out rhino are still considered babies up to the age of three. We had sent him back prematurely. But no one had ever hand-reared a rhino then; we had no point of reference, you couldn’t Google it. So we had given him a chance and given him lots of love, and he was a very happy little rhino for the time that we had him.

The Rhino Who Joined the Family: My Wild Affair will be shown on July 16 at 9pm on Animal Planet Rhino