Kowloon walled city, demolished and redeveloped, is now a park in Hong Kong. Once the most densely populated place on earth, dark alleys with little daylight, where drugs and crime jostled for elbow room, amidst 30,000 law abiding citizens that inhabited its precincts.  A tight labyrinth of dwellings, opium dens and brothels from which the Triads who had gained control of the city, earned their revenue. Everyone who was allowed to remain in the city was forced to pay their dues to the illegal gangs.

From around 1100 AD, at the time of the Song Dynasty, a fortress had been built on the site in order to secure the trade in salt. When the Japanese were defeated in the Second World War, the Hong Kong Government announced their intention to reclaim jurisdiction over what became known as the ‘Walled City of Kowloon’ and thousands of people flocked there in the hope of gaining the protection of the Chinese. The shanty town grew rapidly during the 1950’s and everything that a city could contain existed there, child welfare clinics by day shared the same space with drinking dens and nightclubs. Across the narrow alleys, ran cables that supplied the city with electricity which had been illegally connected at some place outside of it’s confines. Around the perimeter were the premises of numerous unlicensed doctors and dentists who existed without fear of prosecution.

The Hong Kong Police eventually claimed jurisdiction within Kowloon after a murder trial. Workshops made fake fashion items that closely resembled the high value designer goods that were only available in the department stores of Hong Kong. Smart restaurants bought food items manufactured at a fraction of the normal price and often in less than hygienic circumstances, from tiny workshops that co-existed with rats and open sewers, often with a small number of workers that laboured in dangerous conditions for long hours with small financial reward.

The vast majority of people who lived in the Walled City were honest and law abiding but for some, crime became their only option. The living conditions had become unacceptable to the Hong Kong Government as had the unsavoury reputation that the walled city had gained for itself, and proposals for demolition were announced in the late 1980’s.  Generous financial compensation was paid to Kowloon residents although the millions of dollars that had been set aside for this was considered by some to be too little, many stayed on until they were forced to leave.
“Kowloon” by Simon Thompson @tunnelbreeze

“The mediator between the hand and the brain must be the heart”.  This is the epithet to Fritz Lang's masterpiece silent film “Metropolis". 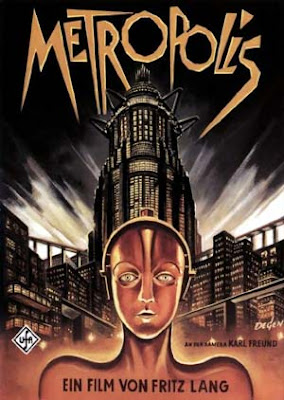 Released in 1927, this is a story of  a distopian city of the future. In Metropolis, the working classes live and work in an underground city whilst the upper classes occupy a futuristic community of skyscrapers and gardens.
The film was noted for its groundbreaking special effects and its attention to detail. Studio sets were on a grand scale and many scenes were represented by large models.
Fritz Lang was an exacting director and filming lasted for 17 months from May 1925. Some short scenes took two whole days to complete.  For the sequence where the worker’s city is flooded, 500 children were brought in from the poorest parts of Berlin. They were required to work for 14 days standing in a pool of very cold water while numerous re-takes were ordered. A robot poses as a false version of the character Maria. When ordered to be burnt at the stake, the director required this to be carried out with real fire. The dress of the leading actress Bridgit Helm caught fire in the process.
New special effect processes were invented including a system of mirrors which gave the impression that the actors were inhabiting the model city.
After release, the full version of the film, which lasted for over two hours, was cut considerably by the distributors with further editing bringing the running time down to 90 minutes.  The original film was lost until in 2007, a full length copy was discovered in Argentina. Although in damaged condition, it has enabled the restoration of an almost complete version of the film. In the public domain, this may be viewed on YouTube.
“Metropolis” was much admired by Germany's emerging National Socialist movement and the Nazi party's propaganda minister hoped that the director would make films on their behalf.  Fritz Lang, however escaped to Paris shortly afterwards and later to the United States.

We have colourised a number of stills from the film and these are presented in chronological order. They do not attempt however,  to tell the full story of “Metropolis”

Posted by Borninaditch at 14:17 No comments:

From Tiller Girl to Baroness

Born in Dewsbury, Yorkshire, in 1929, Betty Boothroyd is best known for her term of office as Parliamentary Speaker. A shop girl on leaving school, she soon became a professional dancer joining the famed Tiller Girls dance troop where she stayed from 1946 until 1954. She then entered politics becoming secretary to Barbara Castle followed by a number of other roles. She entered Parliament herself in 1973 winning the by-election at West Bromwich after failing to be elected on a number of previous occasions. Betty Boothroyd was elected Speaker in 1992, the only woman to have held the position. On resigning in 2000, she also left Parliament having taken the Chiltern Hundreds. Awarded a life peerage in 2001 she has continued her career in the House of Lords where she remains a highly respected if a forthright member.

0 replies 0 retweets 0 likes
Posted by Borninaditch at 17:51 No comments: