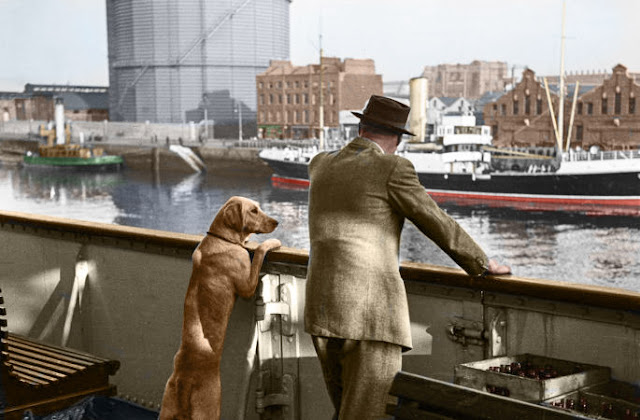 The B & I Lines ferry, M. V. Munster prepares to sail from North Wall, Dublin in 1939 bound for Liverpool.  Sir John Rogerson's Quay on the opposite bank is now lined with modern office blocks. The gasholder, a famous landmark, has long since disappeared.

The photograph is by Fr. Francis P. M. Browne 1880 - 1960. He studied for the priesthood as a Jesuit novitiate in Co Offaly and then at Royal University, Dublin, where he was a classmate of James Joyce.  In 1912, he received a gift from his Uncle Robert, Bishop of Cloyne, a first class ticket from Southampton to Cobh (then Queenstown) via Cherbourg for the maiden voyage of R M S Titanic. He took numerous photographs during his short voyage recording many of his fellow passengers and crew members. He was befriended by a wealthy American couple, who, enjoying his company, offered to pay his return fare onwards to New York. Seeking permission of his superior, he received a telegram "GET OFF THAT SHIP – PROVINCIAL". Landing at Cobh, he returned to Dublin to continue his studies. Learning of the sinking of the ship, he relaised the value of the photographs which he promptly sold to a number of newspapers and journals.  Fr. Browne is regarded by many, as the "Father of Photojournalism" In recognition, Kodak provided him with free film for life.  As a Jesuit Priest, Fr.Browne travelled extensively throughout Ireland as well as Europe using the opportunity to follow his photographic hobby. In his lifetime he took more than 40,000 photographs, many of which have survived.
On completion of his theological studies, Francis Browne joined the Irish Guards and in 1916 was sent to Flanders and France. Wounded five times, and gassed once, he was awarded the Military Cross for distinguished service, and by France, the Croix De Guerre.
After the war he travelled extensively including an extensive voyage to Australia and South Africa in the hope of improving his health. His travels were fully recorded on film.
Fr Browne died in 1960 aged 80 and is buried in Glasnevin Cemetery. 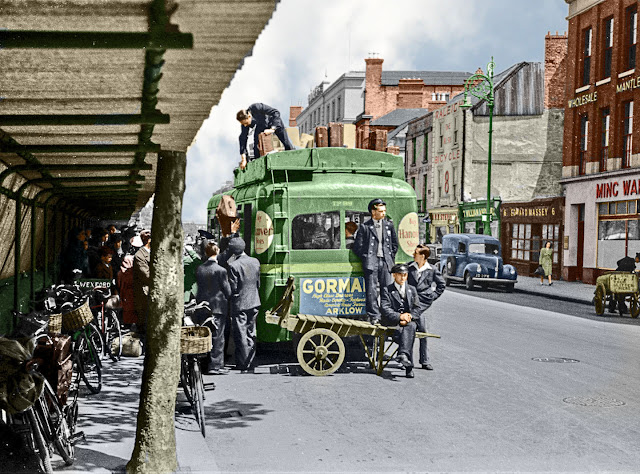 This photograph by Fr.Browne shows the Kilkenny bus loading at Aston Quay, Dublin in 1947. Parcels and passenger's luggage are carried on a roof rack. Porters wait with a barrow for the arrival of a bus from Granard, Co.Longford.
The shelter backs on to the River Liffey and this was the terminus for provincial services until the Central Bus Station - Busarus, opened in 1953. Most of the buildings in the background still exist, as does a tree, perhaps the same one.
at January 05, 2020 1 comment:

The One Man Band

Arthur Griffiths, a Welshman, travelled throughout Britain in the 1950s,  busking as a one man band. He is usually pictured playing a soprano saxaphone to which a collecting cup is attached. Strapped to his back is a large drum which also carries cymbals and a tambourine. Attached to his shoes are cords which are pulled to strike these percussion instruments. He is often pictured surrounded by a crowd of children, attracted by the free entertainment. 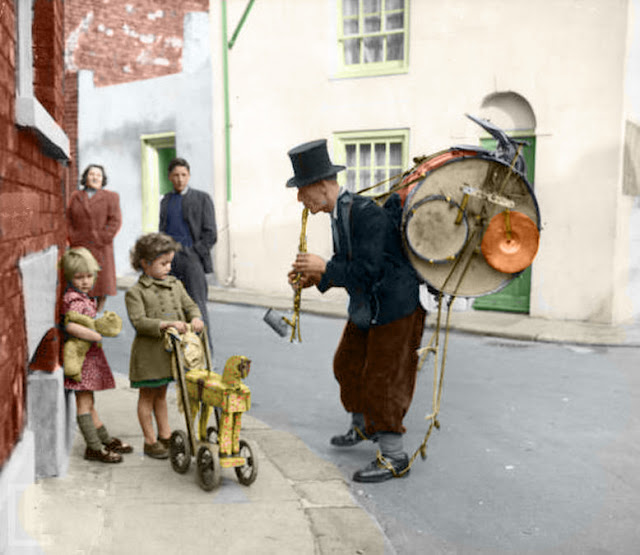 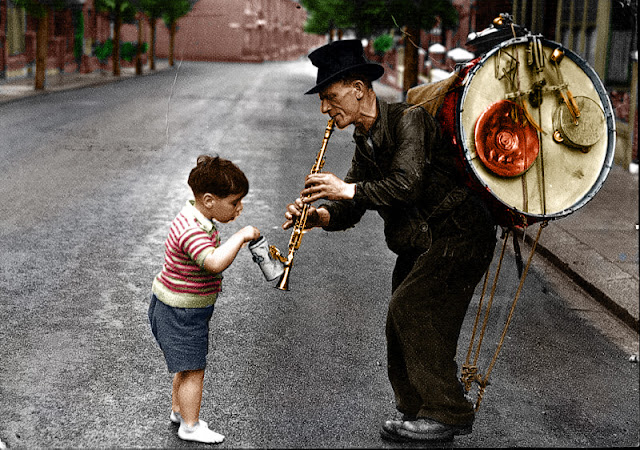 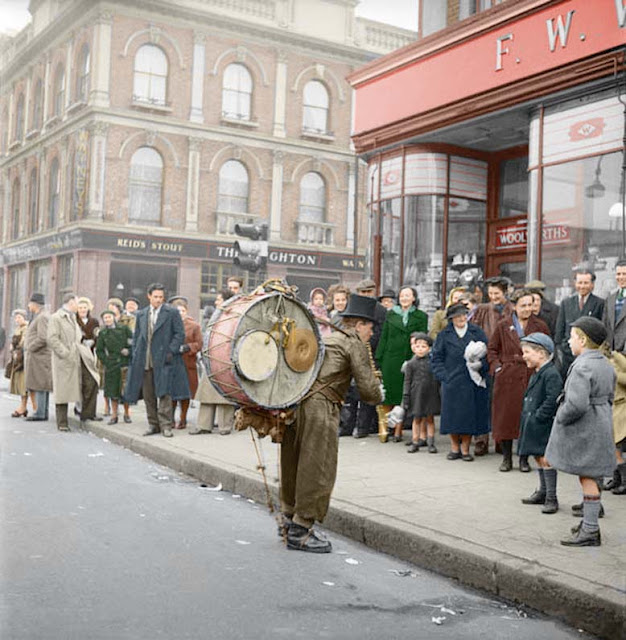 Entertaining a crowd outside Woolworths in Camden High Street, London. The store now has a new, bland frontage and the Brighton pub in the background, as become the Blues Kitchen 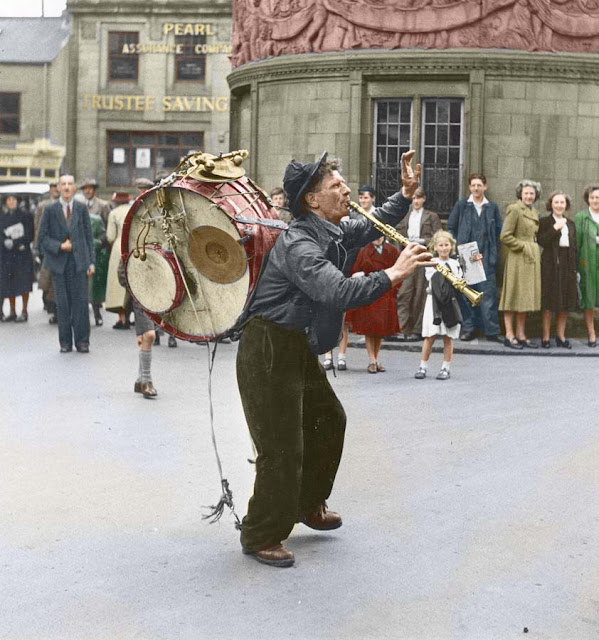 Arthur Griffiths entertains shoppers in Hexham, Northumberland in 1950 where he was photographed by Bert Hardy for Picture Post Magazine. The hat has become badly crumpled.


Wim Sonneveld was a popular and highly regarded cabartet artist in Nederland. He started singing in 1932 at the age of 15 before going on to owning his own club and performing on television, film and theatre. On the stage he took the role of Dr. Higgins in My Fair Lady for 702 performances from 1960. One of his creations was the character, Nikkelen Nelis the street singer, perhaps the role that he was performing when photographed as a one man band artist. He died in Amsterdam in 1974, aged 56. 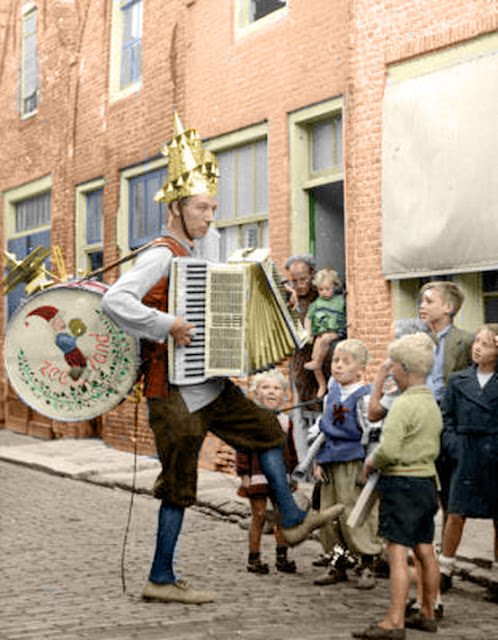 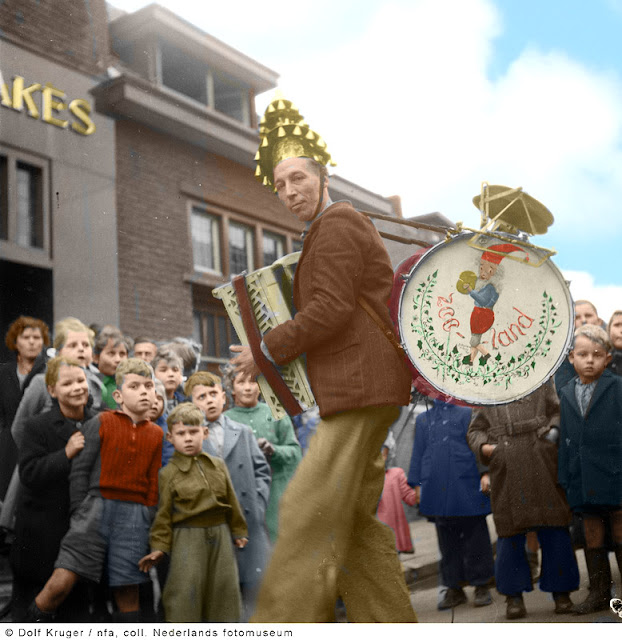 The Leaving of Liverpool 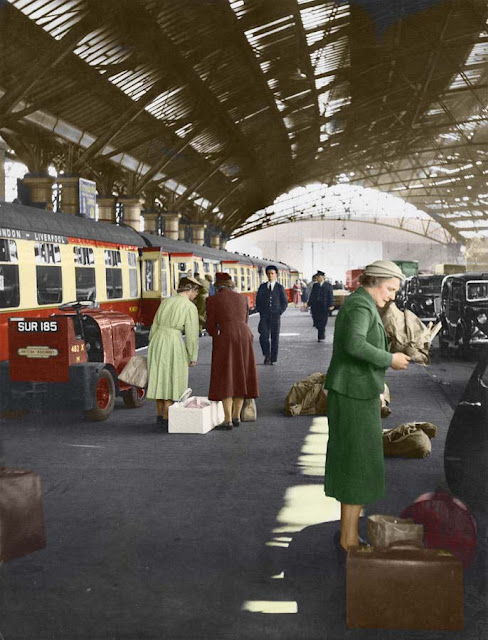 A London train prepares to leave from Platform 7 at Lime Street in 1954. Taxis wait on the "Cab Road" between the platforms which allowed road traffic to access the station.


Lime Street Station is approached by a long series of tunnels and cuttings through the red sandstone, east of the city centre. When opened in 1836, this was the first railway in the world to tunnel beneath city streets. Originally, as a train arrived at Edge Hill, the locomotive was detached and the coaches ran downhill to Lime Street by gravity, their speed controlled by a brakesman. For the return journey, a stationary steam engine would pull the coaches by a cable.The engine was housed in a building at Edge Hill Station, the steam coming through a tunnel from a boiler being in a chamber cut into the sandstone wall of an old cutting.
From 1870, locomotives ran into Lime Street but caused smoke problems in the tunnel. A huge chimney was constructed overhead on Smithdown Lane with a large fan to extract the fumes.
As traffic increased, the tracks were doubled from two lines to four and much of the tunnel opened to the sky. Curiously, where roads cross the line, there are street names attached to the sandstone walls. In one of the tunnels a victorian workmen's hut survives. Disused for more than 50 years, it still contains a hearth, a table, a kettle and a mug.
Look closely at the cutting walls and you will see a number of places where doors and windows are set into the rock providing subterranean offices and shelters.
The station concourse has bronze statues by Tom Murphy. These represent comedian Kenn Dodd and Bessie Braddock,an outspoken Labour MP elected in 1945.
Lime Street has been extended several times since 1836. The 1867 train shed with a span of 61 metre was then the largest in the world.
Another Lime Street curiosity is Platform E. This is a short track between the former Platforms 6 and 7. It does not serve passenger trains and is popularly known as Platform 6¾.

In front of the station is the former North Western Hotel. Built by Alfred Waterhouse in 1871, it is in the style of a French Chateau. It closed in 1933 and has since seen various roles but it is currently being restored to its original purpose.

Many transatlantic passengers will have passed through Lime Street Station although the Riverside had its own terminus for boat trains. Because of the port, Liverpool has long had links with the United States. Here was America's first consulate, opened in 1790 and it was in Liverpool that the American Civil War finally ended when the warship Shenandoah, surrendered in 1865.

Lime Street itself was laid out in 1790. The name is derived from the lime kilns of the area, owned by local businessman, William Harvey. They were removed in 1804 when the fumes caused a problem for a local hospital. Opposite the station is St George's Hall, a magnificent building in the Greek Neoclassical style. Opened in 1854, its purpose was to host music festivals, meetings and dinners. It was equipped with a unique heating and ventilation system that circulated warm air. In summer, the air was cooled by mains water thus making this the first air conditioned building in the world. 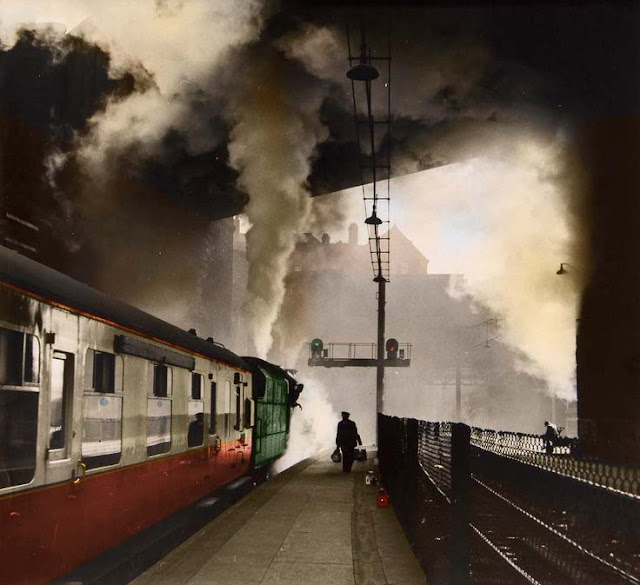 An express pulls out of the station amidst a cloud of smoke and steam in 1950.

The photographs, originally by Bert Hardy, have been digitally colourised.