A Family of Misers

John Elwes came from a family of misers and was said to have been Charles Dicken’s inspiration for his character, Ebenezer Scrooge.

He was born John Meggot in 1714, his father, Robert, being a successful London brewer. His mother, Amy, was descended from the aristocratic Hervey family which later held the title Marquess of Bristol.  His grandmother, Lady Isabella Hervey was celebrated in Jacobean society as a miser in her own right.

Robert Meggot died when John was just four years of age and he came into his first inheritance. His mother was also left £100,000 in the will but being too parsimonious to spend it, she starved to death.   The remainder of the estate passed to John including Marcham Park in Berkshire. 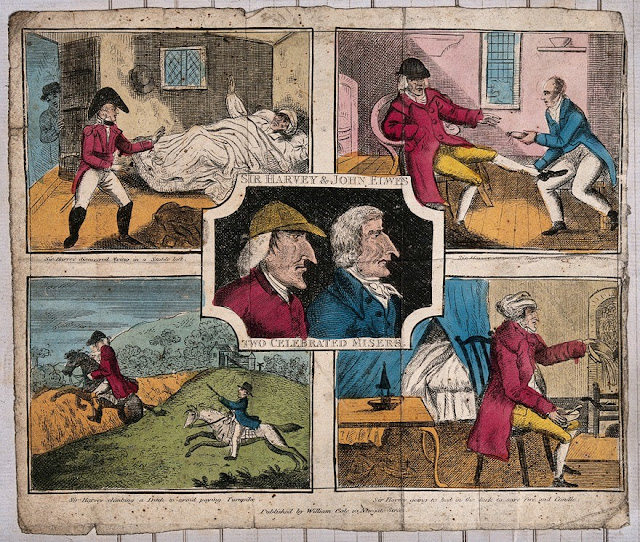 John  was close to his uncle Sir Hervey Elwes, the MP for Sudbury in Suffolk.  The miserly baronet prided himself on living on a meagre £110 per annum.   They would often spend evenings together criticising the extravagancies of others whilst sharing a single glass of wine.  John changed his name to Elwes in 1751 in order that he might inherit his uncle’s estate.  When Sir Hervey died in 1763, a fortune of £250,000 passed to his nephew.  Succeeding to the family estate at Stoke in Suffolk,  Sir Hervey had lived almost alone for sixty years, scrimping and scraping to accumulate wealth. He received few visitors, had no luxuries and had no books. He spent his days  studying old deeds and in the pursuit of usury. He dressed eccentrically in a huge velvet cap, a worn out suit of dress clothes and stockings which reached over the knees. These garments he had found discarded in an old chest left by his father Sir Jarvas Elwas. No fires were lit at Stoke unless a visitor called on business when a single stick might burn in the grate. Sir Hervey would sometimes join his wealthy neighbours, Sir Cordwell Firebras and Sir John Barnardiston for a game of whist. At the end of the evening, the winnings would be meticulously reckoned up and it would amuse observers to see three baronets, each worth a million, arguing about a measly farthing!

Large sums of money were kept at Stoke and a notorious band of thieves, the Thackstead Gang planned a robbery. They tied and gagged the two servants and threatened Sir Hervey with pistols.  Discovering the hiding place, the gang carried off two thousand, seven hundred guineas.  When the robbers were eventually caught, their victim was asked to go to Chelmsford to identify them. He refused, saying “No, no! I have lost my money, and now you want me to lose my time also”.

John Elwes became an MP in 1772 for the Berkshire constituency. His election expenses amounted to just eighteen pence. He would sit with either the Whigs or the Tories according to his whim. It was said that, having only one suit, he could never be described as a turncoat.  He would journey to Westminster on a poor, lean horse, travelling by a circuitous route in order to avoid the expense of the various tollbars.  He carried a hard boiled egg in his pocket to avoid the cost of buying a meal en route. He held the seat unopposed until 1784 when he stood down rather than face the cost of standing for re-election.

There are numerous tales of John Elwes’ frugality, some no doubt are mere legends exaggerated over the years but he was clearly an incredibly parsimonious man.

Winter evenings would see him retire at nightfall, rather than waste a candle. Even on his deathbed, he refused to have a candle lit in order that his barrister might write his will.  He would dine without a fire or would sometimes join his servants in the kitchen in order to keep warm.

His clothes were ragged and were seldom changed; he would usually sleep in them including his boots. His appearance was so decrepit that he would be mistaken for a beggar and would sometimes be handed money in the street.  Although his house was full of expensive furniture, it was never maintained, neither was the building which eventually became uninhabitable. Guests were known to have moved their beds to avoid the rainwater falling through the ceilings.

Elwes owned a farm in Essex and would complain of birds stealing grain. He would not allow hay to be provided for his visitor’s horses.  He owned a number of properties in London and in later years spent his time in whichever house might be vacant, accompanied by an elderly housekeeper and living with a frugal minimum of furniture. There were never any fires and sometimes no glass in the windows.

Towards the end of his life, Elwes suffered from delusions, often imagining that he was being robbed.  He kept small hoards of money in many places which he would regularly visit in order to count and ensure their safety.

Despite his miserliness, Elwes loaned vast sums of money which were seldom repaid. He believed that it was unmannerly to ask for settlement.  He invested in property development and constructed many of the notable Georgian buildings of central London.

John Elwes was found dead one morning in November 1789. He was in his bed wearing a torn hat, ragged shoes and in his hand an old stick.  He was buried in Suffolk.  Having lived on just £50 per year, he left a fortune of £800,000 to his two illegitimate sons, George and John and to his nephew. His children were uneducated for he believed that "putting things into people's heads is the sure way to take money out of their pockets".

George Elwes had just one daughter, Amelia  Maria Frances, known as Emily. She was heiress to his inherited fortune which  included Marcham Park. Emily’s suitor was Thomas Duffield of Lincolnshire. Although Oxford educated, he was considered to have insufficient income to support her and was barred from the house.  In 1810, a conspiracy was hatched and  a chaise and four drew up at the door.  Telling her father that she was merely joining her mother who had gone on a shopping expedition. She was not dressed to travel and aroused no suspicions yet her lover was waiting inside the carriage. Her father learned of her elopement but gave up pursuit at St.Alban’s whilst the couple travelled north to Gretna. They paid the famous old parson, Joseph Paisley £50 to perform the ceremony at the Blacksmith’s shop.  It was said of

Parson Joseph that “he drinks nothing but brandy, and has neither been sick nor sober these forty years”.  On their return to London, her father became reconciled to the marriage  and arranged for a second ceremony to ensure the legality of the union.  Thomas went on to become MP for Abingdon. Emily bore nine children but died in 1835 at the age of 43 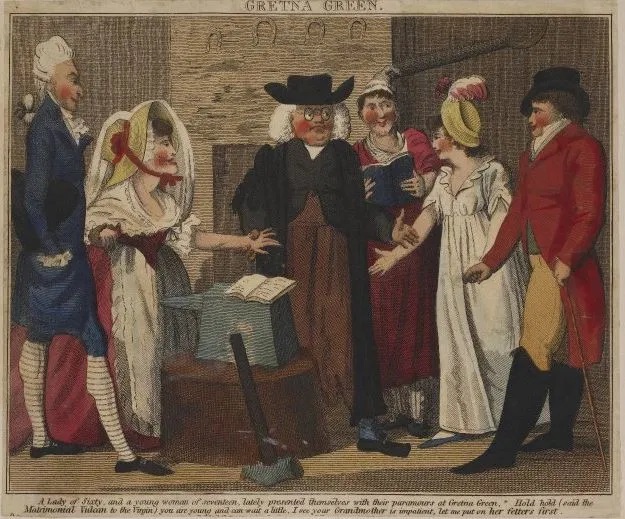 Sir Harvey and John Elwes image: Credit: A man discovered lying in bed; a man holding another's leg; a man on horse-back being chased by another; a man in a nightcap pours water on the fire. Coloured etching. Credit: Wellcome Collection. Attribution 4.0 International (CC BY 4.0)