John “Mad Jack" Mytton was born in Shropshire in September 1796. His family were local squires with a history of more than 500 years. Two years later, his father died, aged 30 and his estate including Halston Hall near Oswestry, passed to his son.  It was valued at £60,000 and provided an annual income of £10,000.

John Mytton started his education at Westminster School but was expelled after fighting with a master. A short period at Harrow was also followed by expulsion after which he was educated at home. A number of private tutors suffered his practical jokes including leaving a horse in the teacher’s bedroom.  He did not fare too well at Cambridge University having equipped himself with 2000 bottles of port. He left college without taking his degree.

A brief military career followed and included a period in France following the defeat of Napoleon. Much of his time was spent drinking and gambling.

Coming into his full inheritance at the age of 21, he decided to stand for Parliament as  the Tory MP for Shrewsbury. He secured his seat by spending £10,000 in bribes of £10 each. His attendance at the House of Commons in June 1819, lasted just 30 minutes; he found the proceedings boring. He stood for Parliament once more in 1831 as a Whig candidate but only received 376 votes.

Mytton spent much of his life following field sports, drinking and gambling. He kept many animals including a large stable of horses and more than 2000 dogs. A favourite horse was “Baronet" which had a free run of Halston Hall and would lay down with Mytton in front of the fire. The favourite dogs would receive a diet of steak and champagne and would be dressed in livery or costume.  A pet bear was once ridden into the drawing room by Mytton in full hunting dress on the occasion of  a dinner party. Its rider was bitten in the leg when he used his spurs on the animal. Pursuit of the fox would take place all year round, even in the depths of winter when he would ride naked. 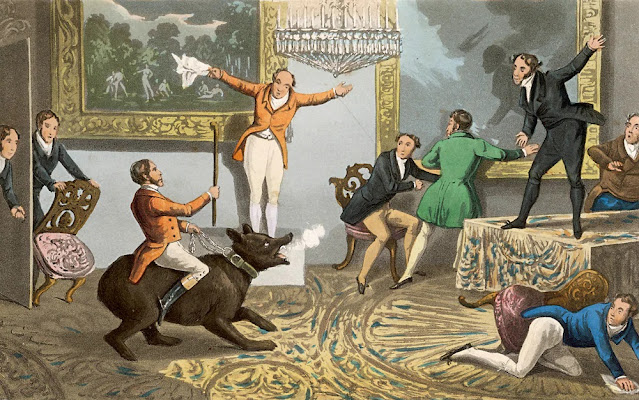 “Mad Jack’s" exploits were often recorded such as the occasion when a wager led him to ride a horse into the Bedford Hotel in Leamington. He climbed the grand staircase and still mounted, jumped from the balcony, over the diners below and out through the window onto the street.   Another stunt saw him attempt to leap a tollgate when driving two horses and a carriage.  Friends might be victims of his practical jokes such as the occasion when two were held up by Mytton dressed as a highwayman and armed with pistols. 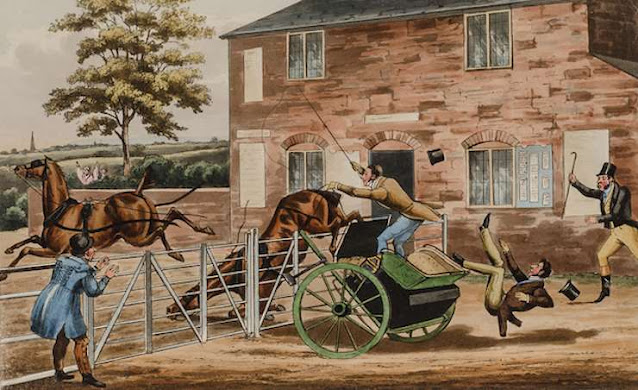 Mytton’s extravagance extended to banknotes being secreted around the grounds of his home. Visitors were expected to pocket the money on its discovery.  He would amuse local children by giving them as much as half a guinea to roll down a hill. His excessive wardrobe included 150 pairs of breeches, 700 pairs of boots, 1000 hats and 3000 shirts. His behaviour was often fuelled by alcohol; a consumption of eight bottles of port a day and a generous quantity of brandy.

It took fifteen years to spend the inheritance and in 1831, the estate was sold. He fled to Calais to escape his creditors and lived in France for two years. It was in Calais that he suffered from a bout of hiccups. His  response was to frighten away the malady which he did by setting fire to his shirt. His servant managed to extinguish the flames and Jack retired naked to bed, triumphant that his cure had worked.

Mytton returned to England in 1833 and ended his days in the King’s Bench debtor's prison in Southwark. His death was attributed to "delirium tremens" a "round-shouldered, tottering, old-young man bloated by drink, worn out by too much foolishness, too much wretchedness and too much brandy"