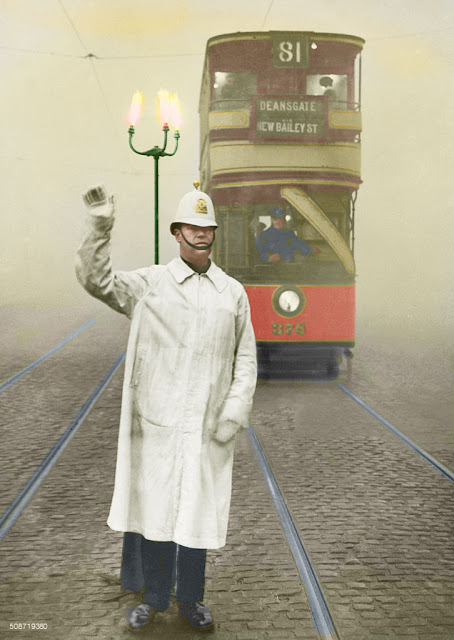 A Salford Corporation tram from Irlams o'th Height arrives in Manchester on a foggy day in 1935. The Corporation operated a tramway system from 1901 until it was abandoned in 1947. Routes from the City Centre served destinations such as Weaste, Broughton and the Docks. 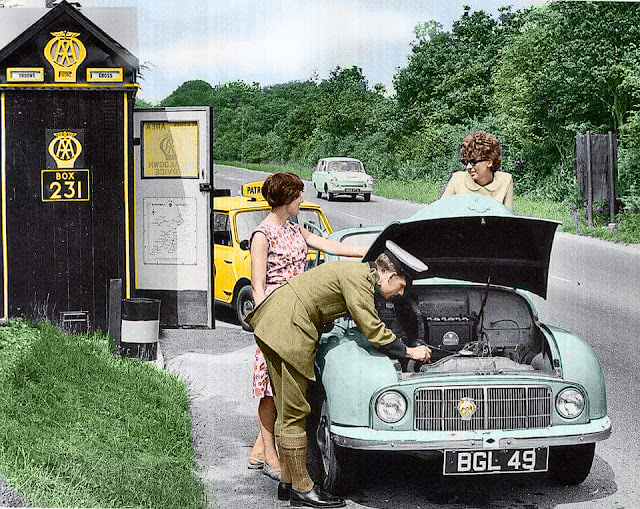 The AA to the rescue. Telephone Box 231 was at Thorn's Cross AA box 231  on the A380 near Chudleigh in Devon. A quiet road at the time, this is now a busy junction. The car receiving attention is a Morris Minor convertible. The AA had about 900 of these "sentry" boxes and members held a key in case they needed to phone for assistance. All were decomissioned in 2002 as mobile phone use became more common. 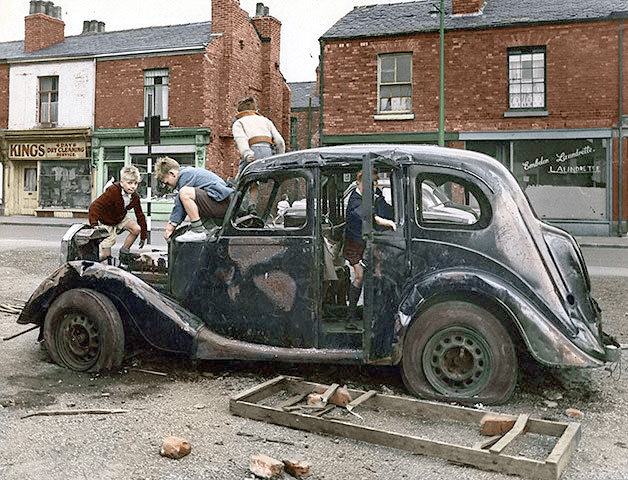 Children dismantle an abandoned car in Moss Side. 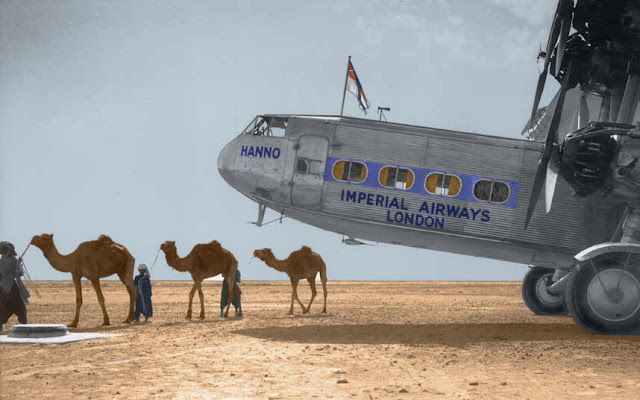 An Imperial Airways passenger plane, carrying the England to India air mail, refuels during a desert stopover at Port Sharjah at Trucial Oman. "Hanno" was an HP42 aircraft, one of four built by Handley Page for the African and Indian routes. Entering service in 1941, Hanno was later transferred to the RAF and was damaged beyond repair in a gale at Bristol, Whitchurch Airport. 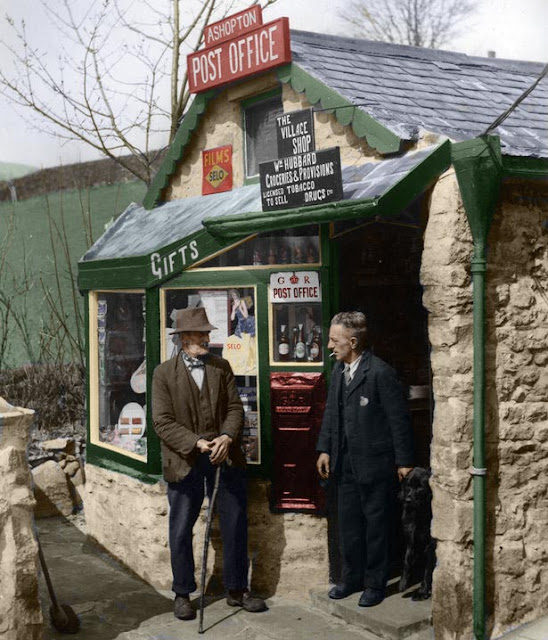 The Post Office at Ashopton in Derbyshire. This was a village in the Derwent Valley with a population of fewer than 100. Besides the Post Office, there was a Methodist Chapel, The Ashopton Inn, a motor garage and a sawmill. The village was abandoned in the early 1940s when the valley was flooded to create Ladybower Reservoir which supplies water to Nottingham, Leicester and Derby. 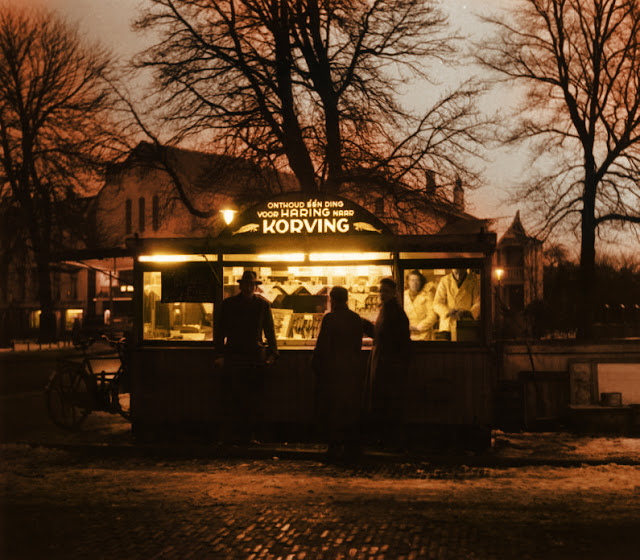 Herring Stand Frans Halsplein, Haarlem 1953. This fish is a popular snack in Nederland and these stalls are to be found throughout the Country. The sign reads "Remember one thing, for herrings go to Korving" 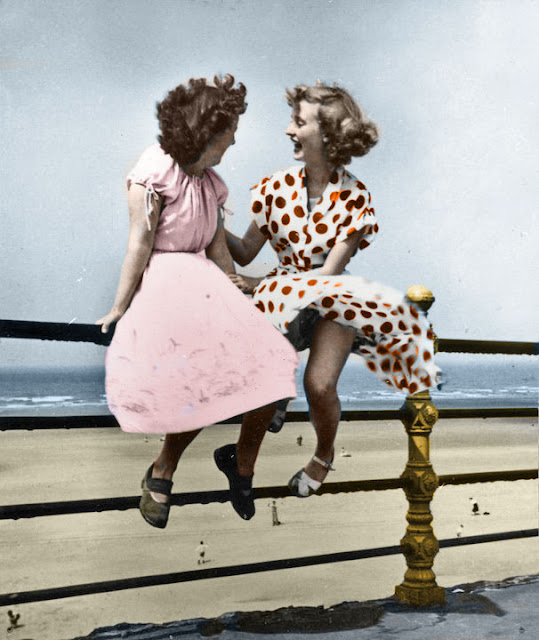 "Maidens in Waiting" Photographed in Blackpool by Bert Hardy. 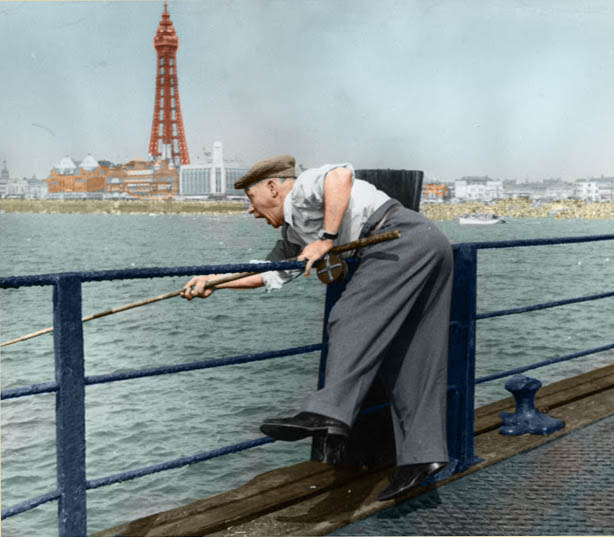 Also photographed in Blackpool was this man fishing from the Central Pier.  It looks as though he may have hooked a large fish. 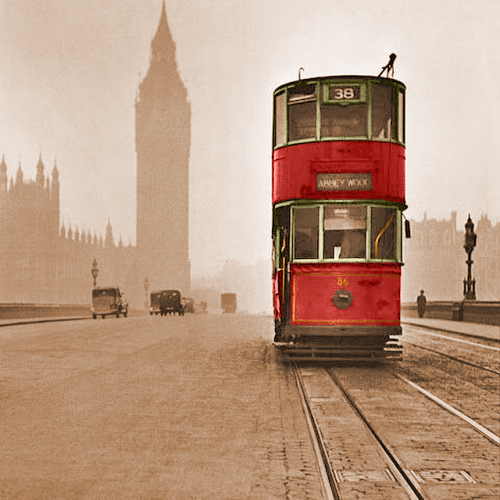 A tram trundles across Westminster Bridge in 1949. Route 38 rand from Victoria Embankment to Abbey Wood, via New Cross, Greenwich and Woolwich. Along with many other tram routes, this was replaced by buses in July 1952 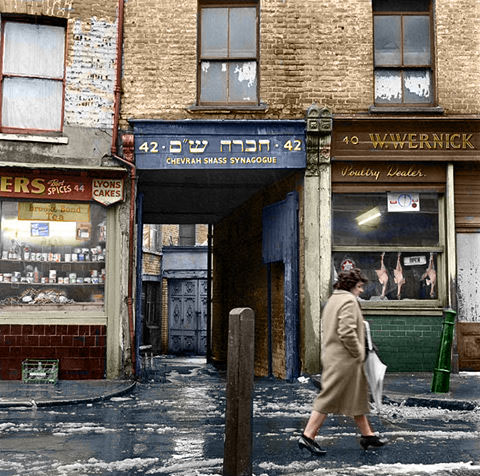 The Chevrah Shass Synagogue was situated in Old Montague Street, Whitechapel in East London. It had been founded in 1896. At its peak, this orthodox congregation numbered nearly 200 members. It closed some time after 1956 when it amalgamated with another congregation. Old Montague Street is largely residential although a few shops remain in the vicinity of the former Synagogue. 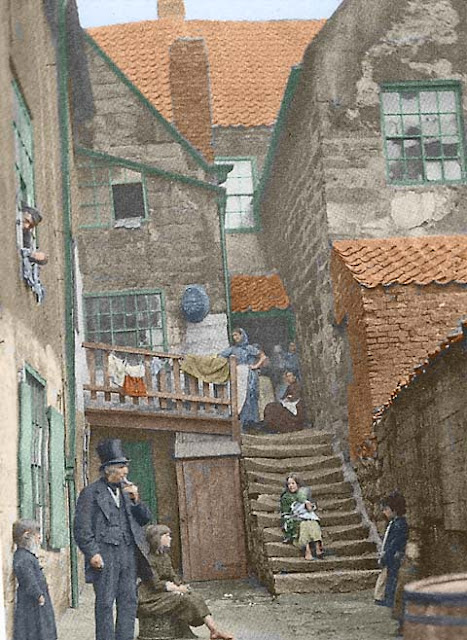 Arguments Yard off of Church Street, Whitby.  This is one of 80 or so remaining yards or "ghauts" to be found in this Yorkshire town. There are a further 30 alleyways or flights of steps.

When houses were built in medieval Whitby, there were often long gardens to the rear. Gradually these were built upon, starting at the farthest end. As demand for housing grew, the buildings gradually encroached upon the land leaving just a narrow space between them..

Deeds from the mid 17th century show one Thomas Argment living in Church Street. The present name is believed to be an English corruption of the original Flemish name 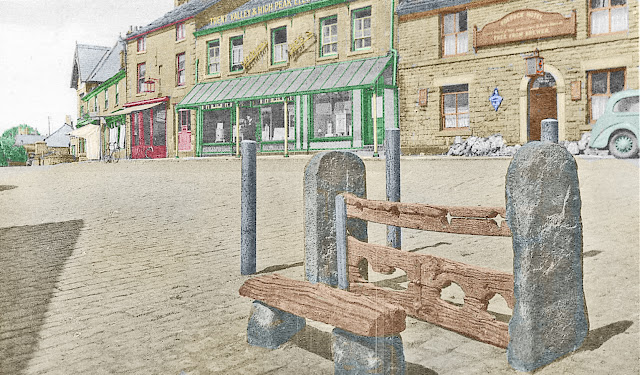 The 18th Century stocks still stand in Chapel-en-le-Frith's Market Place alongside the Market Cross. Behind is the Roebuck Hotel. A house was built here in the 13th century for the Duely family. Rebuilt in 1700, it became a beerhouse in 1720 known as the New Hall. Between 1750 and 1850 the building served as a court house until becoming the Roebuck.